Fort Delaware is Closed for the Season

We are scheduled to reopen to the public on Saturday, April 29, 2023

Find Your Adventure at Fort Delaware 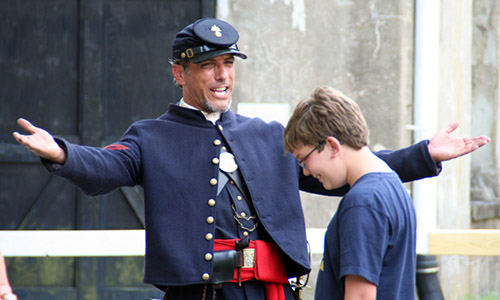 Experience Life During the Civil War

Travel back in time with a first-person interpreter dressed in period clothing and experience what we think life was like during the Civil War. Meet park staff members dressed as soldiers, commanders, the fort blacksmith, and others who may have lived in the fort during the war. 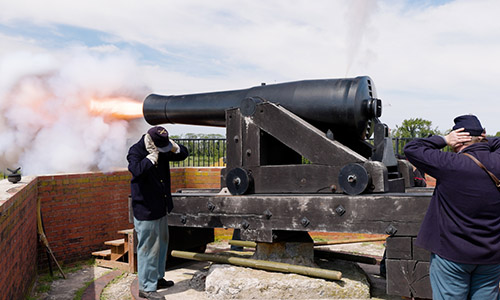 View the island from the ramparts at the top of the Fort and watch the Columbiad cannon fire. Park staff tell the story of the gun and how it was loaded and fired. You'll feel the percussion from the firing and smell the burnt black powder during this engaging program! 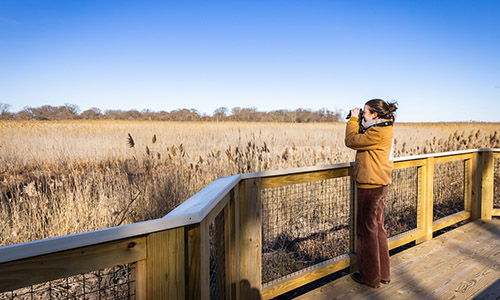 The island where Fort Delaware is located is also home to the Pea Patch Island Nature Preserve. This nature preserve contains a heronry where herons, ibises, and egrets nest. Hike the Prison Camp Trail to see the heronry, and climb the Heronry Overlook to see birds in the trees across the marsh. 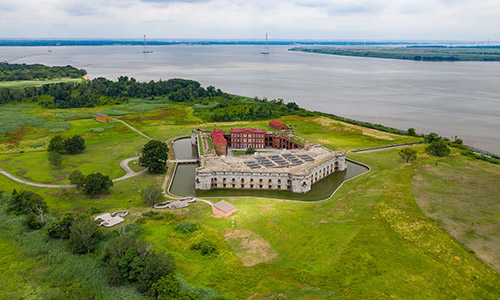 View the Fort from a Different Angle

Take a walk around the exterior of the fort to see the structure’s unique design and construction from all angles. Every part of Fort Delaware was built for a specific purpose.

Situated on Pea Patch Island in the middle of the Delaware River, Fort Delaware was initially constructed in the mid-1800s to protect Wilmington and Philadelphia from enemy attack. Fort Delaware served that role through WWI. The fort was among the most state-of-the-art in the nation when it was completed and housed prisoners of war during the Civil War due to its relative isolation. Within the walls of Fort Delaware, visitors can also see Battery Torbert. Along the Prison Camp Trail lies the entrance to the mine casemate that controlled the mines that were deployed in the river in the late 1800s and early 1900s. The Pea Patch Heronry is one of the largest mixed species nest colony for herons, egrets, and ibis in the eastern United States. Other nesters that can be found on the island include osprey and bald eagles. Paranormal tours are offered in the fall and living history interpretation is offered year-round.

The State of Delaware deeded Pea Patch Island, located in the Delaware River between Delaware and New Jersey, to the U.S. government in 1813, and construction of Fort Delaware was completed around 1859.

Originally built to protect the ports of Wilmington and Philadelphia, Pea Patch Island also became a Union prison camp during the Civil War, housing up to as many as 12,595 Confederate prisoners of war at one time. Manned only briefly during World Wars I and II, the island and fort were finally abandoned and declared surplus property in 1944, when ownership was transferred back to the State of Delaware. Fort Delaware became a state park in 1951.

Today, costumed interpreters take you back to the summer of 1864 -- tour the parade ground, officers' quarters, barracks, kitchen, blacksmith shop and ordnance room, hear stories of great escapes, and watch as the Fort's Columbiad cannon fires a live gunpowder charge! Engage with fort historians dressed in period clothing, and hear stories of those who lived at the fort in 1864. Fort Delaware is well-known for “ghostly” activity and has been featured on Ghost Hunters and other television shows. Paranormal tours are offered in the fall.

Pea Patch Island is a summer home to nine different species of herons, egrets, and ibis. The remote marshes provide an outstanding habitat for one of the largest wading bird nesting areas on the East Coast. A hiking trail and its observation platform provide opportunities for photography and nature study. The Prison Camp Trail traverses part of this area and features a bird observation tower along the trail.

Make Your Own Sewing Kit

Soldiers during the American Civil War often carried a small sewing kit, called a -housewife- with them on the march. In this special program, we'll help you make your own period-appropriate housewife. We'll provide materials for you, as well as a pattern, and help you assemble the kit on site. This program will be held at the Port Penn Interpretive Center. It's free, but we encourage participants to register in advance by emailing Jake at jacob.miller@delaware.gov.

Add to Calendar 2/25/2023 1:00:00 PM 2/25/2023 2:00:00 PM America/New_York Make Your Own Sewing Kit Soldiers during the American Civil War often carried a small sewing kit, called a -housewife- with them on the march. In this special program, we'll help you make your own period-appropriate housewife. We'll provide materials for you, as well as a pattern, and help you assemble the kit on site. This program will be held at the Port Penn Interpretive Center. It's free, but we encourage participants to register in advance by emailing Jake at jacob.miller@delaware.gov. Fort Delaware

Join the Fort Delaware Staff and experience the history of the park as you and DSGI (Diamond State Ghost Investigators) embark on an evening of paranormal investigations inside the Fort.


Same-day tickets may be purchased on a first-come, first-served basis at our ticket office. Call (302) 834-7941 for availability.

* Chips and other packaged snacks are available in our gift shops on the mainland and on Pea Patch Island. There are no food vendors on the island