Find Your Adventure at Fort Miles 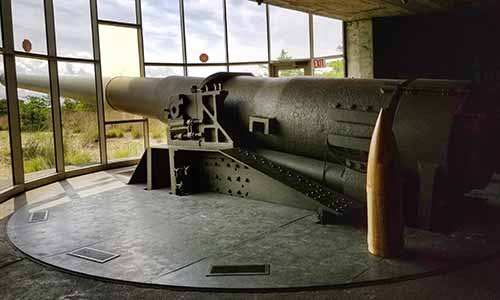 Take a Guided Tour of Battery 519

Experience a historic gun bunker! Battery 519 began construction in 1941 under the threat of war. Tour the battery to learn what the the country faced and how Fort Miles planned to defend the United States. 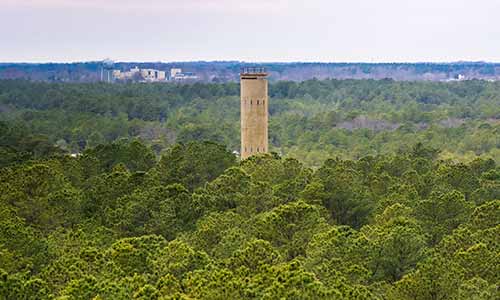 Climb to the top of Tower 7, a World War II observation tower, for a panoramic view of the entire park! Discover the purpose of these iconic towers and how they played an important role in WWII coastal defense. 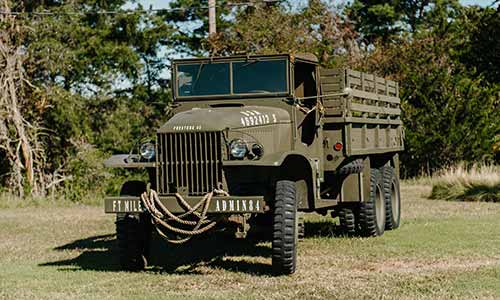 Take a "Trucking Through History" Tour

Board an authentic WWII-era troop transport truck, and see the park from a new perspective! Learn how the different parts of Fort Miles worked together to defend Delaware’s coast. 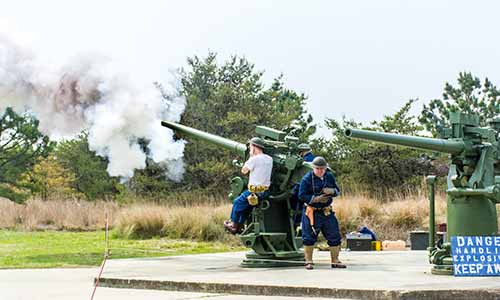 Watch as we fire the guns at the Artillery Park! You’ll feel the power of the artillery that protected the Delaware Bay during World War II and learn how coastal artillery operated.

Resting atop the Great Dune and built during World War II to protect the Delaware Bay and River from German warships, Fort Miles was a state-of-the-art coastal defense fortification. While Fort Miles never engaged an enemy target, it did produce some of the most accurate artillerists in the Army. The Navy conducted tests at Fort Miles as part of the first attempt to create a fleet defense missile and also used the fort for its secret Sound Surveillance System to track enemy submarines. Parts of the fort were used as a vacation retreat for military families. Tower 7, one of 11 World War II-era fire control towers, now provides a unique perspective of the park and surrounding area. Today, the historical area operates as a museum, artillery park and oceanfront event space.

Lying amidst rolling sand dunes at Cape Henlopen State Park, on a high bank overlooking the Atlantic Ocean, is the Fort Miles Historical Area, a former World War II military base that was a key piece of our nation's coastal defense from World War II through the early 1970’s. Today, Fort Miles is home to the Fort Miles Museum, encompassing a gun battery, six barracks buildings, a fire control tower, an orientation building, and an artillery park.

The history of Fort Miles exemplifies America’s call to action to stem the tide of war against German invasions along the Atlantic Seaboard that, at the onset of World War II, appeared virtually unstoppable. The gun batteries of Fort Miles, secret state-of-the-art installations built within the massive sand dunes of Cape Henlopen, were designed to defend against the powerful German navy.

With more than 2,500 soldiers stationed on high alert, the heavy guns, mine fields, and searchlights of Fort Miles defended the vital trade centers of Wilmington, Philadelphia, and beyond. As America moved into the cold war, the role of Fort Miles shifted to highly classified missions defending against the threat of Soviet submarine operations off our coastline.

Fort Miles is a special place for history enthusiasts, veterans, families, or anyone interested in learning about Delaware stories, Delaware heroes, and Delaware’s role in WWII. Take a guided tour, enjoy an interpretive program, visit the art gallery, take in a special event, and celebrate "The Greatest Generation."

Museum exhibits and artifacts within Battery 519, a 15,000-square-foot fortified underground chamber, bring to life Delaware’s wartime stories of submarine encounters and surrender, daring actions of civilian pilots, and hometown heroes who sacrificed for our freedom. The museum’s collection of armaments provides visitors a unique opportunity to experience first-hand how state-of-the-art technology from an earlier day was used to defend the nation.

The grounds of the museum are open 8 a.m. to sunset daily. The Museum Orientation Building is open on Fridays and Saturdays from 10 a.m. – 4 p.m. March 3 – June 10 and Tuesday through Saturday June 13 – September 9. Public access to the museum is available only through guided tours and open houses.

This new rental venue is available for weddings, concerts, meetings, reunions and many other types of events and gatherings. The site offers the best of both natural and cultural history, with an easy transition from the outdoor pavilion to the inside area, along with spectacular views of the Atlantic Ocean, miles of picturesque dunes, and breathtaking views, all in the heart of historic Fort Miles. For rental information, visit the Fort Miles Historical Association website.


There are currently no programs scheduled at this location

Public access to Battery 519 is only through guided tours.